They were, perfectly trimmed nails, manicured, perfectly waxed eyebrows, pssssttttt, seniorita, fake tanned, up-tities, gleaming lips with smack of lipgloss and perfect teeth with extra help. Fur lining their coat, fox, animal. Money blinging up and down from their toes, to their shoes, to their dresses, gleaming on their ears. Flash, choke, drown.

I was this ordinary woman sitting behind the booth watching as flocks and flocks of beautiful aged women walked in with their diamond rings and bags, swaying in their heels. Diamonds could not hide the wrinkles lining their eyes, their fingers, crispy and dried. I tried not to think about it, but suddenly my face froze and I zoned out.

“I can’t imagine being that woman when I’m 80 and I don’t want to be. If all our lives were…were about our outward appearance, and when I’m 70 I have perfect manicures, tattooed eyebrows, money to flood a nation….yet, no purpose, no meaning, no goals and passion…and all I did was get pedicures and have little lunch parties? and attend fundraisers (oh God bless fundraisers, without money we wouldn’t be able to fund many non-profits), but just in that moment, I zoned out and thought this…

I don’t want to be that, whatever that is.”

When I’m 70, I don’t want to spend money on all that. I want to have built orphanages with the money that could have gone to fox animal furs, diamonds, houses, rings…I want to have rescued kids from brothels, women from abuse, men from abuse…I want to have done something greater than just prove that ‘I made a lot of money in this lifetime’.

Later today, I bumped into several Hyatt hotel housekeepers. “I gotta go home now, and tomorrow I come again”- said this one cleaning person. I thought to myself, “to have the discipline and faithfulness to keep going even though you are doing mindless work…that is perseverance”. He helped me get my load off the elevator.

Suddenly, I was struck with a paradox. These well manicured, perfectly curled haired of a women would probably not raise a hand to help an ordinary woman unloading stuff off an elevator….but an ordinary, probably struggling housekeeper would find it easy to serve another human being. I was so struck with an epiphany, I almost zoned out again.

Having struggled for the past month, getting criticism about my choice of becoming a self-starter, shit from people I thought I trusted, eating ramen some days, denying my boba cravings, getting criticism from my buyers, etc….and just getting inundated with shit. I saw many things clearly.

It’s funny how we need to be drowned in dung, criticisms, hardships – to see life ever SO FREAKEN CLEARLY.

I am so grateful for the hardships and tears I went through in the past month. So grateful. There were times I found myself doubting the inkling of my identity, times I cried while walking in downtown LA, calling a friend quick- “I’m in shit, can we talk?”.

Times I thought to myself, “what is the very purpose for which I’m created”.

Things have started to turn around, my 12 readers that do read my blog posts. Perseverance and prayers have paid off. Fate has claimed its way in my destiny. I’m victorious in my little, finding hope in the essence of love. I met people who reminded me of who I am…people who grabbed a hold of my vulnerable heart and whispered encouragement, spoke into it my deepest desires, and pushed me to get up even when blood was dripping out of my nose, my knees were wounded by rocks, back with layers of scabs, head almost insane from hunger and insanity, confusion at times. Some were close friends, some were new friends, but all were in tune with the desires of my soul. Rather than mock me for my insanity, which I am insane 99.9% of the time (1% of the time I’m sane when I listen to naysayers), they joined my insanity and became my risk-taking comrades.

We will destroy the system of conformity and complacency. We will form new beauty and create a society based on love, not profit. We will allow uniqueness to flourish and romance in the specialty of being an individual, yet conspire in being always together in our insanity. We will let the moment take us by the hand, feet with music, not by logic.

Because who said life was logical? In fact, some of the greatest history makers were insane in their own time.

Yes, if you didn’t know – you are reading a history makers’ blog.

It’s a big, huge, claim to make- maybe even a little narcissistic, but I’ve been through too much crap to give up making sense of this beautiful life. I claim what I claim because I know this is true. 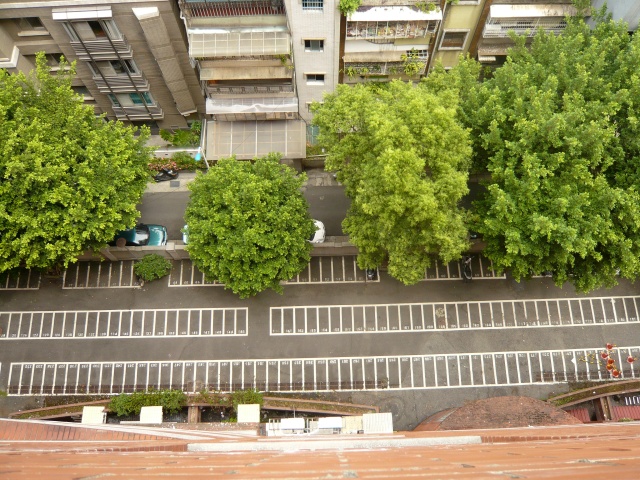 From the top of a hotel I stayed in Taiwan last year for a night. It was the best solid alone time I ever got.

Intuition told me this photo represents what I’m talking about- you can do the analyzing.