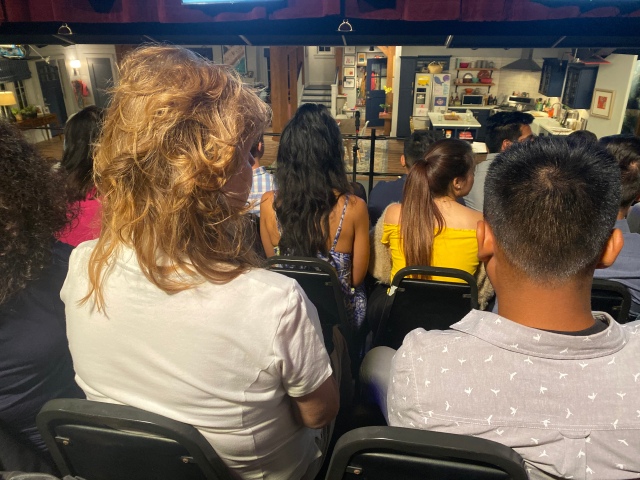 I said God I need an audience.

I thought He would have a pastor ask me to speak at his or her church but instead he sent me to a film studio.

Wow. So today I felt led to go to the Korean spa and to cancel my dental appointment in the afternoon as I was healing and processing some stuff in my heart. I was laying there and God said go get a massage. I went downstairs and suddenly heard someone say “omg I just got booked for a Netflix show”. My heart got all excited and suddenly all the anger I was feeling went away.

I was going to get a massage when I heard God say ask for a refund. I canceled the appointment and noticed they were casting for audience. God said, do it. Go, go, go.

So I started going to Culver City without knowing for sure if I was booked.

But God just kept saying “go” even though there were some doubts but I ran. I took a shower and got dressed. He said there’s no time.

I got an email halfway there saying I was booked.

There are divine appointments today. Please pray over their hearts today. Pray for Jesus to pave a way. There is some lost sheep 🐑 He wants me to reach.

There was also another voice that kept telling me to go home. So the devil comes to sidetrack you.

(I wrote this before the following happened).

While waiting for the bathroom I met a chinese girl and we ended up sitting together. It turned out she was also Christian. God had told me someone would give me a ride home. She gave me a ride half way. The girl next to me was also Christian and her name was Happy. I shared my Holy Spirit journey with her while she drove me to downtown.

Then the audience host asked people to dance in front while the actors was preparing for their next scene.

I found myself telling my story. Half of it anyway.

But in front of 200 plus people plus all the crew and actors behind me, I said Jesus loves you. Speaking right into the mic.

So many things about today was God.

Like the main characters name was Rebecca (of the sitcom I was sitting in the audience of). The content of the show was God speaking to me directly. It’s like God inspired the writers to write something to speak to me through the script.

And then I had no fear to go up and dance in front of 200 people when the host asked. I remembered before I went overseas to 20 countries backpacking alone, I used to fear being on stage or in front of people but after battling cold, fear of death, fear of not having food or having shelter, heat, sickness, not having much money, asking strangers for help, overcoming the fear of men and fear of judgment (while usually being alone).

When you’re in a foreign country, it’s night time and God tells you you’re going to stay with someone but you don’t know who???

Or when you barely have enough for tomorrow’s meal and you don’t know where the money will come from to sleep at a hostel???

Or God tells you to ask strangers for money or to buy you a meal? And they are people you’re supposed to prophesy over?

Or you have to pray for strangers who then yell at you?

Or you have to pray for someone who has a panic attack in Ross?

You kind of lose every fear.

I went on stage and felt no fear.

I remember still feeling fear the first time I went on a show, but not this time.

I evenly openly talked about Jesus in front of the people and the crew/actors.

The audience host himself was Jewish.

It was a crazy day. I could feel such a difference in me after all the things I went through, the hardships, the warfare, the challenges.

The host asked me what I wanted to be. I said I would be famous and help a lot of people. He said doing what. I said I’d teach people how to live without fear. I said that Jesus loves you.

One guy said he’d take me all over the world. That he would take me by the beach and we’d own a beach house. Like wow Jesus you read my mind.

Make a contribution to this ministry and help set people free from fear and condemnation- thank you!
https://www.paypal.me/rebekkalien
https://venmo.com/Rebekkalien
zelle-rebekkalien@gmail.com