“Malacca (also spelled Melaka) is a Malaysian state on the Malay Peninsula’s southwest coast. The capital, Malacca City, has a colonial past seen in its preserved town center, the site of 16th-century, Portuguese St. Paul’s Church. It’s also home to Christ Church, built by the Dutch in the 18th century and converted to the Anglican denomination under British rule in the 19th century.”- Google

Over the last month, I’ve been analyzing and regrouping what I want my website to be, I want to stay completely authentic to my vision because it is my business and life!

Well, when I was in Southeast Asia, I felt led to visit Malaysia after a month in Vietnam. I was at Hanoi at the moment and basically had nothing booked. I managed to be my own booking agent and found 2 flights connecting in Bangkok, which would save me approximately $50 since I was booking a day before. Here’s a tip, any flight coming out of Bangkok will be cheaper since Bangkok has such a large airport (flights are cheaper!).

I spent a week in Kuala Lumpur at a bed and breakfast and proceeded to look up buses to the next city. I had never heard of Melaka, but the pictures looked old world, vintage. I was the only one in the van. I stayed at the most expensive hotel since I had nothing booked and really needed to recharge (after walking around the whole city with a broken luggage). Later, I remembered Discovery Cafe and Hostel, a bright dutch looking building. I walked over with my heavy backpack and I guess mentioned I had a blog, but TOTALLY forgot about it.

Anyways, the manager approached me and asked if I wanted to write about a new hotel they had opened up. IT WAS SUCH A GEM, with such love and history by the owner David. 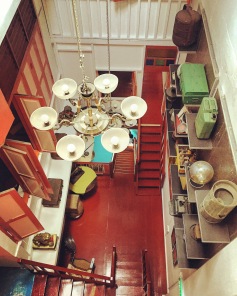 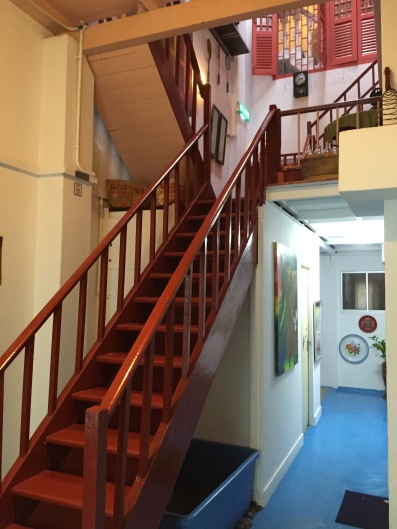 This boutique hotel is a 3 level beauty tucked away just half a minute walk to the peaceful river of Melaka.

Why is this hotel different from any other? The colors are vibrant, every antique and vintage beauty is from David (the owner’s collection). The hotel has character, is built from the heart of the owner, and sparks nostalgia in any visitor’s hearts.

The color scheme is inspired by Greece with white, red and sky blue. In 1999, Discovery Hotel was a 3 story building with a cafe. An Aussie suggested “why not have rooms?”, from that day on, the business has expanded to hostels across the cafe, and of course D’Riverside Inn, the unique boutique it is today.

ROOMS- there are single bed rooms, duplexes that fit 1-6 people. There are only 9 hotel rooms in this boutique hotel and it is catered towards families, solo travelers, friends and colleagues. You can even book the WHOLE hotel if you have a company of people. The architecture of this hotel is meant to build community, friendship, and ease for travelers. The first floor is functional and easy for grandparents that have trouble climbing stairs. There is a cute garden on the top floor where I would write in my journal. 🙂

David is a self proclaimed china-man whose grandparents immigrated to Malaysia. He worked for a travel publisher for 18 years and came to love the world of travel. Not only is he owner of Discovery Cafe and Hotel, his business is a family one. I had the opportunity to stay at D’Riverside Inn for more than a week and felt like a queen in my own palace.

The staff also welcomed me with open arms. After traveling for two months already, I was worn out and felt home sick, but I regained energy and peace again in Melaka. In fact, I felt like I had been adopted to a Malaysia family. Some staff were from Philippines, some from various countries, but I always felt at home.

Below: These amazing rides that takes you around town and plays any music you want. 2. Dancing with ladies at a temple. 3. Eating with the family, did I mention MALAYSIAN FOOD IS AWESOME?!!!! THE FOOD IS RIDICULOUSLY GOOD. Seafood especially.

Beautiful Mosque by the sea